A couple of years ago, when I was in the darkest pits of my depression, my wife corralled us all onto the bus and up to Pets at Home. We came out with two guinea pigs, and a relatively large cage – which I then had to carry back on the bus and home.
I had picked a furry golden brown abyssinian pig, while a short haired black and white pig picked my wife, with markings on it’s face that made it almost look like a mini badger.

We called them Loki and Thor.

Naively, I had thought that guinea pigs were just giant hamsters.. a myth that seemed to play out in my eyes when they would hide most of the time in their little house, and only venture out for food and water. Though this didn’t last long as they eventually got used to us – and being in prime position in the living room meant we were all coming and going anyway, so they got used to the noise as well.

We bought them this massive run that was initially meant for puppies, but had bars close enough together to stop little piggies escaping. I remember setting it up the first time, placing blankets on the laminate floor for them, and scattering some toys around before letting them in. Watching them “popcorn” and run laps round the side of the run was wonderful, and their little personalities started to come through.
I used to think that perhaps we had named them the wrong way, as Thor was a mischievous little swine! He always had a lovely wide grin on his face, and when I stepped into the run to pick them up, his playful side shone. For Thor was a truly defiant piggy, who went against the norm of what you’d expect of a guinea pig. Thor loved chases. He would come up and sniff you, give you a lick, then literally bounce away and hide, waiting for you to come after him. If you didn’t, the nose would poke out and give a sniff, then come back over for another lick – and maybe even a nibble – before bouncing off again. He wasn’t running in fear, he was literally bouncing away, wanting to play.
We also affectionately nicknamed him ‘waddles’ for his big furry butt that shook every time he walked. He never walked anywhere, he waddled, and he was never an overweight pig – it was just how he walked. We also called him Thunderbutt, as if he did want to run, that little bugger was fast as lightning! Usually always when I had to catch him to pick him up as well… for both Loki and Thor hate being picked up; but when they’re up in your arms, they’d snuggle down happily – it was just the lifting off the ground they didn’t like.

As they grew, we learned to trust them more when out, and we stopped putting the run up.

Apart from a few nibbled cable incidents, and the odd nibbled box, handbag, or whatever was near, they never really damaged anything. Apart from maybe chewing through my wife’s hairdryer cable. They were quick to stop when told, though ( when we caught them! ). Thor also continued with his defiance and would scent underneath my chair and desk when out – letting me know that he was the top piggy, and I was the janitor! And it wouldn’t be the first time that I’d be sitting at my desk, and little piggy butt would come up and lick my ankles. He also had an affinity for licking my wife’s elbows when out getting parsley treats. That was his way of letting her know “I’m here too! feed me parsley!”

As they continued to grow, they grew out of their toys… literally. When they were young we had a collapsible tunnel – which they both could fit through. But, before long, Loki – being the skinnier one – was able to zip through it, but pig butt got stuck and had to be helped out!  And even though there was the odd dominance battle, but never any blood, they did everything together. They chased one another, they’d follow us up and down the hall, and they’d come charging out their cage and chase us to the kitchen to make sure we got their treats. And while they wouldn’t snuggle up together to sleep, they did share beds – they had no issue with each other being in either bed – and would share water bottles and food bowls. The odd little scrap for the same piece of lettuce or parsley aside, of course!

Thor also loved his red pepper. Cut into strips, he’d go mad for it. They both loved their parsley too, but it was the red pepper that was Thor’s favourites. They were also partial to the odd carrot, with Thor usually stealing it and running to hide with it; as if we’d ever take it away from him!

He was a lovely, mischievous little piggy, and always with the softest fur I’d ever seen. Both Loki and Thor were forever grooming themselves, but they did get the odd bath here and there. Something which was a magnificent ordeal in itself – as this required them to be caught and picked up. And remember; Thor likes chases. What we didn’t expect, was that they were quite happy in the water getting washed, and especially loved being dried afterwards and being wrapped up in a towel; both of which would sing when curled up in our arms, getting dried. However… mischief was always abound, and one bath night didn’t quite go to plan – he escaped from the basin. Which then had me chasing the swine around the living room trying to catch him, while he’s shaking himself and soaking me in the process. Loki obviously thought this was a good idea, as he did the same when it was his turn, but with the added bonus of still being covered in shampoo, and therefore more slippery to catch.

Unfortunately, our time with Thor was cut short.
Just last week, he became very ill. Now, everyone is allowed an off day, and it wasn’t unusual for either piggy to have a day where they were a bit under the weather, but they’d always bounce back from it, and be back to their usual selves pretty quickly. This time, Thor didn’t, and we got worried and phoned the nearest vet we could.
We took him in, and the vet wasn’t quite happy with him, gave him some pain relief, and us a “critical care” sachet to mix with water and try to syringe feed him. Which sortof worked; but we’re not sure how much he actually ate versus how much went down my t-shirt from him dribbling it. He was never very good with water bottles as he’d forever chew them, rather than lick them to get the water out – and he was the same way with the syringe.
The vet told us to bring him in the following day to be checked over, which we did.
This also meant that Loki was separated from Thor for the first time – as they were both together when we got them, and had never been separated since, bar for a few hours timeout when they got a bit too overzealous in their dominance battles.
My wife got the phone call as I was at work… and it wasn’t good news.
He had many abscesses on his lungs – though they didn’t appear to be affecting his breathing – and he was suffering from gas bloat.
They’d given him plenty of antibiotics and motility drugs to try keep things moving. With a hope that he’d start to improve over the next few days.
We picked him up about 6pm on Thursday, and we gave all our love to him that night. We got him feeding from the critical care stuff, and we cuddled him and gave him belly rubs and massages. This seemed to help get the gas out, and boy did he let the gas out! He was a jet propelled little piggy! We thought we were making progress, as he seemed to be slowly getting better. But when we eventually went to sleep for a couple of hours, he deteriorated fast, and when I woke up he was cold. I immediately wrapped him in a towel to warm him up, and tried to feed him again. But he wouldn’t take it. We managed to take our last pictures with him before he went back to the vets for the day, to see if they could help him.

We didn’t get a phone call from the vets that day; which we thought meant good news – till I phoned them at 3pm asking for an update, just as I was about to pick the kids up.
He hadn’t eaten anything.
This meant his gut had stopped working.
He was dying in a very painful way.

We all went to the vet at 4pm. We all said our goodbyes, and I picked him up for the last time; able to feel all his bones – he’d lost so much weight, so quickly. But, defiant to the end, he had enough strength to give my wife a little lick on the hand, and gave us all his big cheeky smile as the vet took him away for the last time.

We now had to focus on Loki, as he was missing his Thor as well. And the last thing we wanted, was for him to get upset enough that he’d stop eating and end up ill.
So we decided we had to get him another cage mate – he had always been with Thor, and it didn’t seem right to leave him by himself… especially as we had upgraded them to a giant 6 foot by 2 foot cage – with  a loft! – in the past few months. Thankfully, Thor managed to share in this… as when we added the loft, he loved to run up and down the ramp. Well I say run up and down, it was more run up, and slide down. We checked around a few places for rescue piggies, but we couldn’t find any. We then went back to Pets at Home, and there by himself, was a little chocolate coloured piggy. This little piggy also had Thor’s colouring …. on his butt. Which seemed very fitting with Thunderbutt having passed so suddenly. So we got him. And have named him Ragnarok
This has helped Loki immensely, as he immediately picked up again, and while there is a divider in the cage between Loki and little Ragnarok ( who is at least half Loki’s size, ) he hasn’t stopped chewing the bars to get to him. He has also been wheeking and singing to him.. so I don’t see any issues when we do drop the divider and let them sit together.

We’ll never forget Thor.. who touched our hearts and left tiny footprints all over them.
From his waddling thunderbutt, to his cheeky smile. His lovely soft fur, which he kept right to the end, and little licks.
He was best piggy. And to have that bit of Thor’s colouring through Ragnarok will always remind us of him, and remind us of all the mad things he would do…

It’s amazing how attached you get to the little furry buggers… but I loved Thor, and there’ll forever be a pig butt shaped hole in my heart for him.
And he’s no longer in pain… he’s no doubt running around in parsley fields, having all he can eat, and being as mischievous and defiant as he always was.

Right from the beginning, until the end. 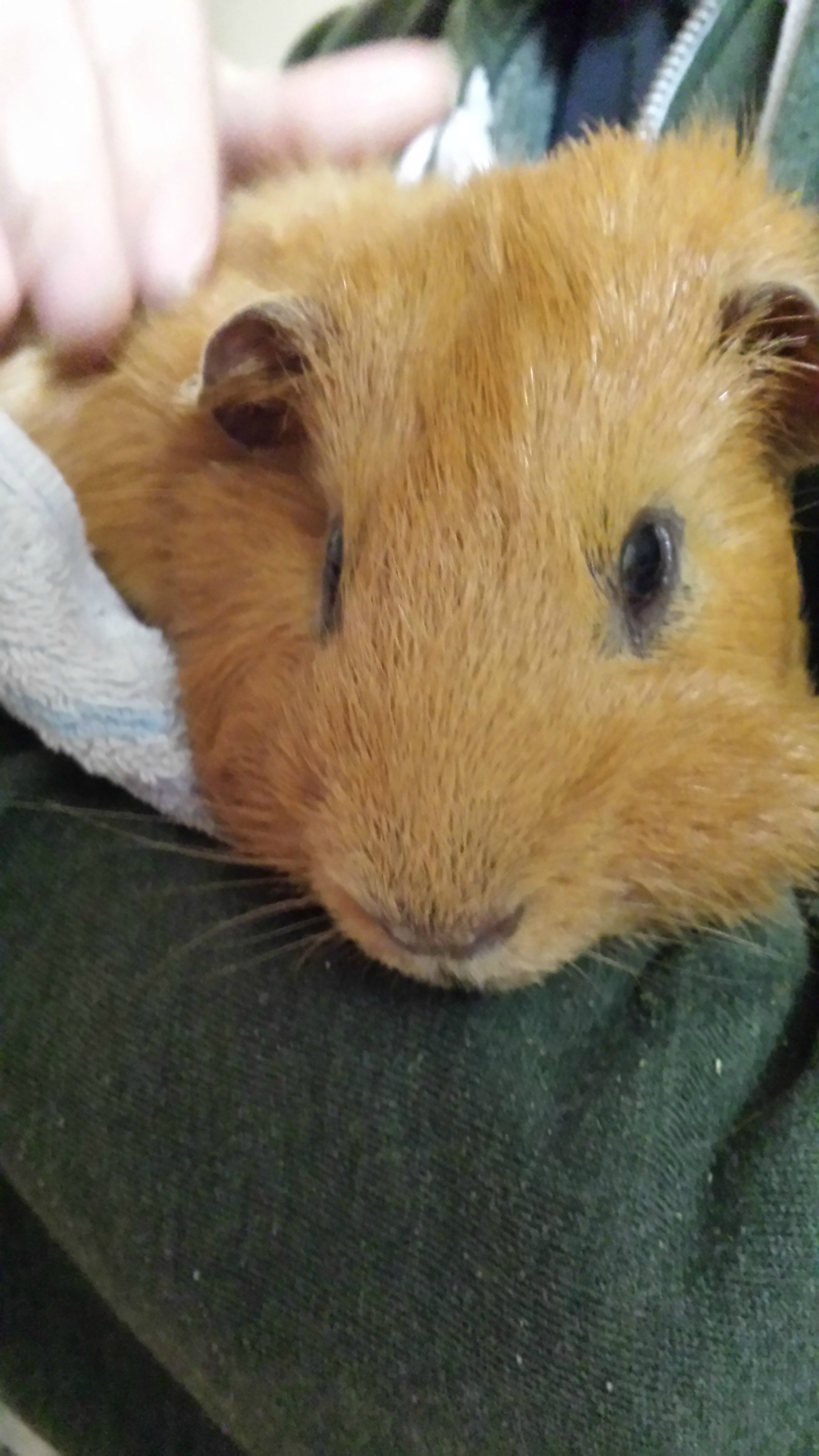 That cheeky face shone through everything.